This could be useful for discussing the purposes of government (in general) and the Hobbesian / Lockean argument for why government may be necessary for protecting the right to life (in particular), but also how the government itself can be a source of threats to rights. (The people wanted security guards to protect them from the “violent / aggressive family,” but then the guards appear to have themselves become abusive.) I think this is also an excellent illustration of how one doesn’t have to assume that all or even most people are naturally violent in order to conclude that a well-ordered government can significantly reduce violence. In this case, one family was violent, but this led everyone else to hide, acquiesce, or fight for themselves in order to be secure from the instigators. Given enough time, and without security guards, the otherwise non-violent cruise members may have concluded that “the best defense is a good offense,” and thus begun to act even more violently towards the instigators. This kind of security logic is a significant part of the analyses of violence (and its decline) by Stephen Pinker in Better Angels of Our Nature and, to a lesser extent, by Daniel Deudney in Bounding Power.

‘A Carnival cruise in the South Pacific descended into violent anarchy‘ 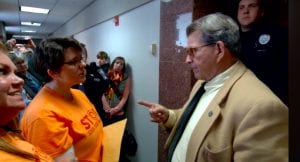 This video is great for a variety of purposes, including political participation, civil liberties (1st and 2nd Amendments), and theories of legislative representation. It’s especially great that it’s here in Georgia. Good stuff here for discussing party in the electorate and, specifically, the demographic differences between the two major party coalitions.

This could be GREAT for class discussion.

Might make for fruitful class discussion when covering political parties.

I could see using the findings reported in this article to frame a discussion about what drives division within American politics. In Ch. 3 of my textbook, I give a modified Madisonian account, arguing that two perennial drivers of division / conflict are ideology and interests. As I’ve told many of you, I plan eventually to add a “third I” to the discussion: (social) identity. But I think this article should give us pause before going as far as many contemporary scholars have gone (e.g., Bartels, Aiken, Druckman, Bolsen, etc.). They are close to contending that, at least in the mass public, it is ALL about social identity. As we see here, it appears that, at least when it comes to sex/gender identity, ideology appears to be an intervening (and more consequential) variable.

‘Why Donald Trump never really had a “woman” problem among Republican voters.‘-LSE US Centre

There’s a lot in here to draw from for American Gov classes. Here are just two. (1) The accurate description of political parties as non-homogeneous coalitions of conflicting interests and ideologies. And (2) his reflections on the motives that drove him into politics, and how they have changed over time. He said it started as something of a “sport” for him and then became more about personal “ambition,” but now he sees politics as “a way to make fundamental choices for the country.” This fits well with the discussion in Ch. 3 of American Way of Government and Politics about (a) the different kinds of motives that drive different people into politics and (b) the discussion of whether there is such things as a genuine “politics of principle” or whether cynics are correct that there isn’t. Maybe it’s not quite as bad as some previous studies suggested.